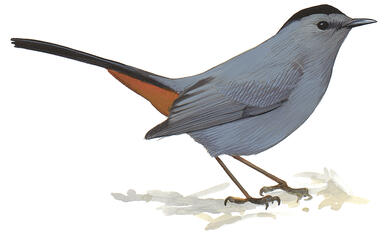 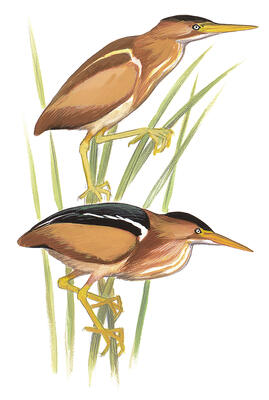 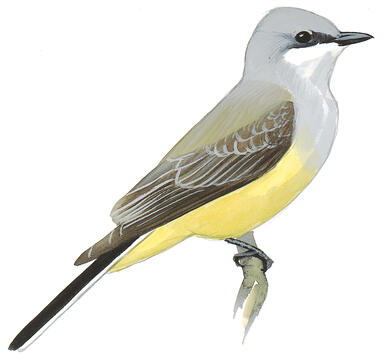 Every year has been different for the birdathon, and this year was no exception. What was Audubon Arkansas’s BirdLR Birdathon is now Audubon Delta's BirdAR Birdathon, as the new regional Audubon office consisting of AR, LA, and MS has formed, and staff in AR decided to embrace in name the statewide event the birdathon had already become. This year, team members were asked to bird together, while given three weeks in May from which to choose to run their big day. It was hoped the flexibility would encourage more teams to form and allow teams to pick a peak migration day as forecasted by BirdCast.

The Birdie Haynes started in their own yard on May 7 with a number of migrants among the resident species, such as Baltimore Oriole, Rose-breasted Grosbeak, Chestnut-sided Warbler and Gray Catbird. The most unexpected was a female Blackpoll Warbler gleaning caterpillars from an oak, yard bird #131! Then it was off to Cook’s Landing where they found shorebirds, including Semipalmated Sandpiper, Spotted Sandpiper, and Lesser Yellowlegs. American White Pelicans lingered on the river while Cliff Swallows gathered mud for their nests on the Big Dam Bridge. The trees at Bell Slough WMA were alive with warblers - Northern Waterthrush, Ovenbird, Mourning Warbler, Canada Warbler, American Redstart, and Golden-winged Warbler. After tallying 49 species at Camp Robinson SUA, they were off to Lollie Bottoms where over 200 Bobolinks were foraging. A stop at Lake Maumelle netted a lingering Common Loon, before finishing the day at home with a Tennessee Warbler and a singing Chuck-will’s-widow. Donna and Adam had 97 species, wonderful memories, and the pride of raising money for such a great organization!

The Coooo'lest Team Name set out on May 22 to try to reach a goal of 175 species. However, with a severe thunderstorm warning as an omen for the day to come, the tried and true Craighead Forest Park warbler-fest failed to yield significant results, scoring a pitiful two warblers and thirty species total. However, the cooler temperatures brought some activity out at Bald Knob NWR, bringing their total to around 80 by the time they broke for lunch. The stars of the birdathon came later in the evening: a very angry Prothonotary Warbler faced off with them, followed by a curious Painted Bunting, and then unexpected (but not unwelcome) Black-bellied Whistling-Ducks. By the end of the day, the Coooo'lest team was rain soaked, and had in fact become the coldest team of the 2022 birdathon. Amber and Gary fell short of their lofty goal, but had a very respectable 114 species, given the suboptimal weather conditions.

The GeoBirbs had an enjoyable, though quiet backyard birdathon at their North Little Rock home on May 22. They counted 25 species–mostly the usual yard birds for a suburban lot. The opportunity to pay attention to birds throughout the day yielded a few surprises, including realizing they had fledgling Carolina Wrens and Downy Woodpeckers. They also noticed a new robin’s nest, and enjoyed watching the female add nesting material throughout the day. Ryan was on Turkey Vulture watch from the hammock, which also has excellent views of the bird feeding and bath station. Kathy took a break from birding to plant natives like Blue-stemmed Goldenrod from Audubon’ native plant sale! Their one warbler was a loud but secretive Magnolia Warbler that came in with the afternoon wind gusts. They also added a new yard bird (#91)! They heard (very faintly) the song of a Wood Thrush in the distance. Any day with a new yard bird is a good day.

Audubon Society of Central Arkansas’s team members were Karen, Marian, Leslie, and Becky.  On May 17 they started at Gillam Park, then birded the Frazier & Fourche Dam Pike area down to David D. Terry Lock & Dam, and ended at Burns Park and Cook’s Landing. Best bird was a rare Black-billed Cuckoo at Gillam Park. The surprise bird was a Common Nighthawk sleeping high in a tree on a large bare branch, also at Gillam. Along Frazier Pike they were treated to calling Northern Bobwhites, numerous Western Kingbirds and Scissor-tailed Flycatchers, plus soaring pelicans, kites, and eagles. They finished the day with Forster’s and Least Terns, and more bobwhites. They tallied 70 species, and great fun was had by all!

The Cabot Middle School South No Egrets consisted of three students and two staff. The kids enjoyed birding around campus. They saw lots of crows while practicing their bird-finding skills through binoculars. Stephanie is recruiting them and other students for a new birding club. Later, Stephanie and Melanie birded Fourche Dam Pike, Terry Lock & Dam, and Melanie’s family farm. They ended May 7 with 43 species, including Stephanie’s life Orchard Oriole.

The Brown-eyed Junco’s birdathon was completed at a friend’s cabin near Pangburn on the Little Red River. Her day started with the insistent song of an Eastern Whip-poor-will against the backdrop of a dark, quiet night. Using the Merlin app’s sound identification feature as a tool to help her identify birds by their calls and songs she added species such as Blue Grosbeak, Summer Tanager, Scarlet Tanager, Red-eyed Vireo, and Northern Parula. The most iconic image of the day was a Ruby-throated Hummingbird perched on top of a power line. Another memorable moment was when a Belted Kingfisher (one of Jennifer’s all-time favorites) flew up the river, following every bend, almost skimming the surface of the water. A few minutes later a Great Blue Heron soared above. A small chore at the end of the day revealed that a family of Eastern Phoebes was nesting in the eaves of the back of the cabin, as lovely a close to the day as the start.

Team M Gidonax ended up focusing on Marion County and the surrounding area. In fact, the majority of the team's birding was done at the Fred Berry Conservation Center and the ample amount of habitat that it holds for grassland and scrub-loving birds. At Fred Berry, multiple warbler species, many of them migrants passing through, were seen and heard along with other passerine passer-by's like Swainson's Thrush and Rose-breasted Grosbeak. A late Red-breasted Nuthatch surprised the group from a patch of eastern red cedar. Also, a signing male Painted Bunting along with special appearances by Northern Bobwhite and Wild Turkey, made the grassland section of the center the place to be. After the morning things slowed down, but the team managed to pick up 97 species, with 73 of those species seen at Fred Berry.

The Thrashers began their birding day early on May 7. The sacrifice of sleep paid off as David and Ragan managed to hear three owl species and two nightjars before the morning chorus. Dawn was spent driving the gravel roads around the Flatside Wilderness Area where they picked up a number of warblers, thrushes, and other woodland birds before returning to Little Rock to meet up with Bill. The next stop was Cook's Landing where a Ring-billed Gull and Lesser Scaup were still hanging around. From there the team traveled through Lollie Bottoms and over to Morrilton, picking up a variety of open grassland birds such as Bobolink. Eastern Kingbirds were in abundance, with several fences hosting twenty or more birds, equally spaced along the wire. Once in Morrilton, a flooded Point Remove and Cherokee Park yielded lots of warblers, including a Cerulean Warbler. From there the Thrashers traveled the bottomlands south of Blackwell and Atkins, finding an abundance of shorebirds including one field with a flock of 43 Wilson's Phalaropes and a field with hundreds of Lesser Yellowlegs. A Peregrine Falcon made an appearance, scaring up the shorebirds, and providing some good looks for the birders on the side of the road. They were running out of daylight at that point and spent the last few hours picking up some final birds including Pied-billed Grebe and Eastern Phoebe. It was a good day of birding with many lessons learned for next year. The Thrashers are looking forward to another season of competition in 2023.

True to their name, Early Birds & The Worms convened in a Jonesboro hotel lobby at 3 AM on May 14, then headed to Scatter Creek WMA where they heard both Eastern Whip-poor-wills and Chuck-will’s-widows. Back in Jonesboro at Craighead Forest Park, a relatively quiet dawn chorus was brightened by a beautiful Blackburnian Warbler and the spiraling song of two Veeries. At Bald Knob they picked up Grasshopper Sparrow and other open country birds, then a Western Kingbird at an electrical substation. At Bald Knob NWR, Bell’s Vireo was a gimme, but shorebirds and wading birds were largely gone. After a stop for Galloway’s Great-tailed Grackles, they made it to Arkansas Post National Memorial for secretive marshbirds and more migrants, including Least Bittern and Canada Warbler. At Camp Nine Farm, the Baxters helped them rack up needed waterbirds: Mottled Duck, Pied-billed Grebe, American Golden-Plover, Black Tern, White-faced Ibis, and more. They made it to Warren Prairie Natural Area in time to hear a Red-cockaded Woodpecker at a cavity cluster. With daylight and their energy gone, they tried for Common Nighthawk in Monticello without luck. At 9:30 PM, after 18.5 hours, 440 miles, and 133 species, Samantha, Jeremy, Heather and I called it a day, a satisfying day for sure.

Altogether the 12 teams tallied 192 species. Of those, 43 were seen by only one team, including Lesser Scaup, American Avocet, American Woodcock, Olive-sided Flycatcher, Red-breasted Nuthatch, Black-billed Cuckoo, Common Loon, Golden-winged Warbler, Bank Swallow, Pine Siskin, Least Bittern, White-faced Ibis, and Red-cockaded Woodpecker. The Thrashers and the Early Birds tied for the greatest number of species among the field teams (133). The most species seen among the yard teams goes to Janet Rowe of Hot Springs Village (42) thanks to her lakeside location.

Audubon Delta thanks all the birders for devoting their time and talent to the event, and for helping to raise funds and friends. Together we raised over $7,400 for conservation and education programs in Arkansas. I removed my team from the competition of most money raised, so that means ASCA won this year! Time to start strategizing for next year!